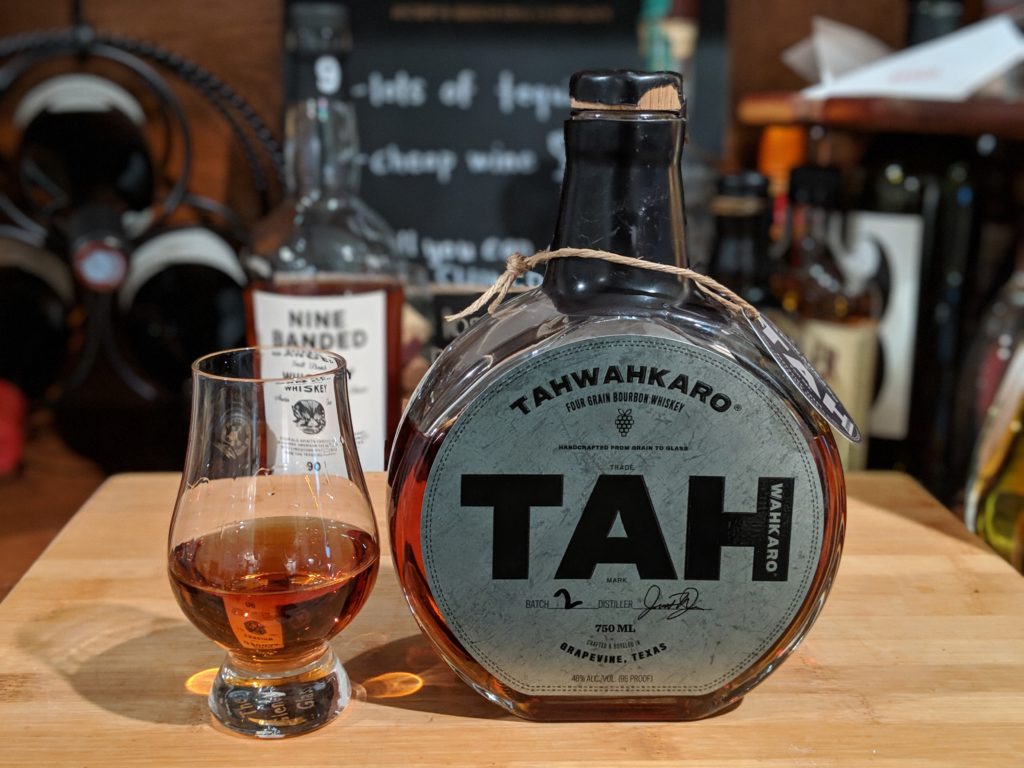 While the Austin, Texas whiskey scene is absolutely bursting with energy, that’s not to say that the rest of the state is bereft of quirky and interesting whiskey distilleries coming onto the scene. One that just hit the shelves with their very first product is Tahwahkaro, a company whose name I almost guarantee you won’t pronounce or spell correctly the first time but is definitely worth the effort to learn and remember.

Tahwahkaro Distilling Co was founded in 2016 by a group of individuals in Grapevine, Texas.

The distillery chose the name as a way to tie themselves into the history of the Dallas area, the original Native American name for Grapevine Creek that runs just east of the airport. It was the location in 1843 where Sam Houston and the Republic of Texas signed a peace treaty with the native tribes ending a chapter of the Texas – Indian Wars.

The phrase translates into English as “bend in the river” and appealed to the founders as they were starting a new chapter in their respective lives and were excited to see what was coming “just around the bend” for them.

I want to take a moment before we get into the product and talk about the insane risk these folks are taking.

This Four Grain Bourbon is their very first product. Getting a spirit distilled and aged for a bourbon is a time and money intensive process, which means the distillery is hemorrhaging money for years before they have even the hope of making a single dollar in return. That requires a massive infusion of capital and some seriously strong willed owners.

Usually a distillery will try to mitigate some of that risk by producing an un-aged (sometimes called a “NAS” or “No Age Statement”) spirit like a rum or a vodka. That lets them make some money and get their name out into the market while their aged products (such as whiskey and bourbon) mature in the barrels. Still Austin is an example of company that did just that, producing some great “white lightning” un-aged whiskey for a couple years and having just released their first bourbon in this month.

The problem here is that this process cuts into the distillery’s production. Now they have to re-direct some of their effort into these other product lines instead of focusing on making something amazing. That’s a problem that Iron Wolf Distilling ran into when their Hotscotch product got too popular, they actually had to dip into their bourbon reserves to fill orders of their flavored whiskey.

Tahwahkaro did none of that. 100% of their effort went into this bourbon. It was their sole focus, and they are almost literally betting the farm on it being a success. It’s an amazingly huge gamble, but I think they pulled it off.

I ran into these guys at the Texas Whiskey Festival, and Jake from TWF did a great job interviewing one of the founders prior to the event getting some great information. They talk about the company, the history, and most importantly the process that goes into making this spirit.

The founders state that their love of high rye bourbon is what prompted them to do something a little different with their product, and as a lover of a high rye content bourbon myself, I can’t say that I fault their inspiration. Given that bourbon is probably one of the most closely regulated spirits that a Texas distillery can produce (with a mandated 51% corn grain bill and other aging requirements), they wanted to do something a little different and see how far they could push the envelope.

The grain bill starts with a combination of Texas produced rye and wheat, corn sourced from a Texas based co-op (but might be sourced from outside the state), and barley from a brewery supplier who sources it nationwide. From there they add locally sourced water and ferment the mash before distilling it into the refined white spirit.

Once distilled, the whiskey is aged in new production charred American 30 gallon oak barrels for slightly over a year, just enough to make it a legitimate bourbon (but still shy of the “straight” label). The trick here is that the Texas climate does a great job promoting the maturation of the spirit, with the large swings between hot and cold temperatures forcing the spirit into the wood and back out again. By using smaller barrels, they also promote that process thanks to an increased surface area per drop of whiskey.

Let me start with: I’m not here to rain on anyone’s parade. Just because I think there are some flaws in the design of something, doesn’t mean I don’t like the product — I point these things out to provide feedback to the manufacturer so they can improve. And in this case there’s a lot of room for improvement.

The overall design is different from the typical cylindrical base with a stout neck. The bottle itself is shaped almost as if you laid a whiskey barrel on its side, squished it a little from the top, then took horizontal slices of that barrel. The bottle has flat front and rear aspects but the sides are rounded and bear no markings or other information. From the top of the bottle there’s a short neck that is capped with a wood and cork stopper and sealed in wax much like Garrison Brothers or Maker’s Mark. 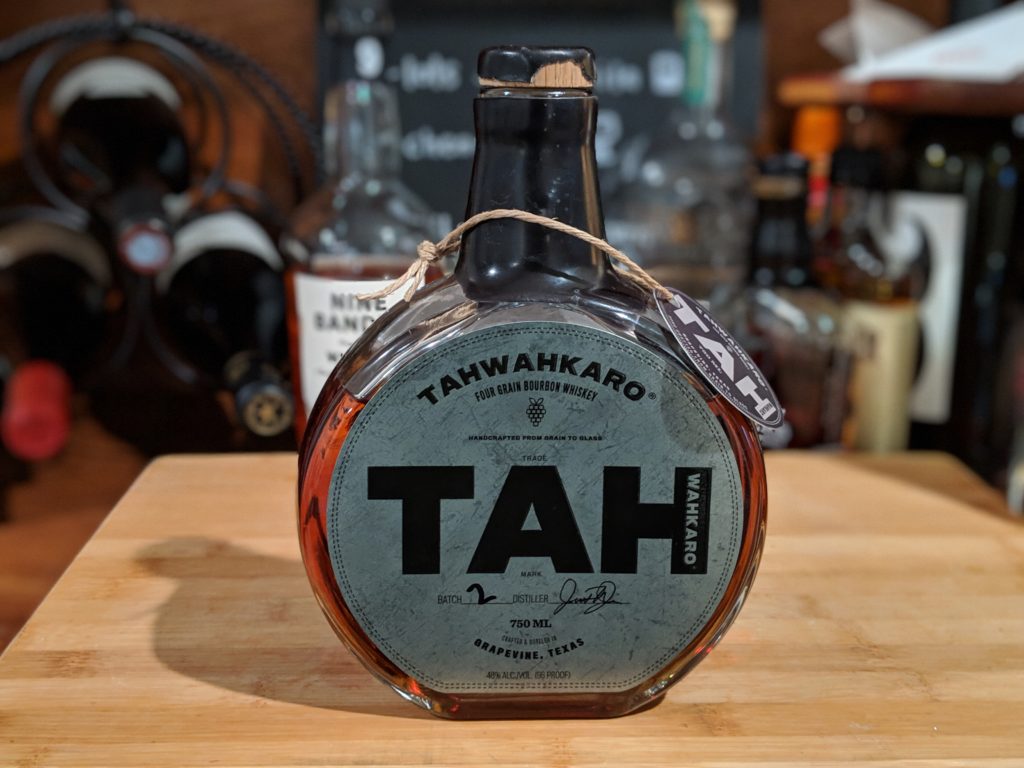 This design is trouble, and here’s why.

I originally found these guys at the Texas Whiskey Festival, and liked the concept and visual of this bottle. One taste and I immediately headed to my local liquor retailer to try and find a bottle. The website said it was in stock and even gave me a specific aisle location, but after thirty minutes of looking I couldn’t find it. I gave up.

A week later I tried again, and this time I decided to investigate every single bottle until I found it. Another thirty minutes later and I finally figured out why I couldn’t see it — the store staff had turned the bottle sideways to save space on the shelf. The large flat surface should make it stand out on the shelf — much like it stood out at the whiskey festival — but in practice it was taking up too much shelf space and store employees decided to turn the bottle rather than rearrange the entire shelf to fit it.

I feel like the same problem is going to crop up when the bottle starts getting onto bar shelves. It’s just large and awkward enough that it won’t fit in a normal width slot, so that might hurt the chances of it being prominently displayed on the bar shelves. It’s cool to have a craft whiskey on the menu, but from the bar’s perspective it’s probably better to have two bottles of moderate interest displayed than only a single bottle of any kind.

For a master class on bending stores and bars to your will, I recommend Tuthilltown Spirit’s Hudson whiskey line. Their bottle is much wider than normal, but the completely round base forces stores to make room for it instead of giving them the option to slide it in sideways. And that same shape makes it nearly impossible to stick on a back row of a bar shelf — since it’s short and doesn’t fit in a more standard slot, it needs to go in the front row.

I love the idea of a barrel cross section as a bottle. I love the dipped wax seal. But having seen firsthand how retail workers responded to it, I think it needs work.

The corn is something that comes through very clearly in the scent of the spirit. It almost smells like I’ve got a warm tortilla sitting in front of me, something which makes this Texas resident very happy. I feel like the wheat and the malted barley included in the grain bill goes a long way towards making that “warm baked bread” sort of scent and I love it. 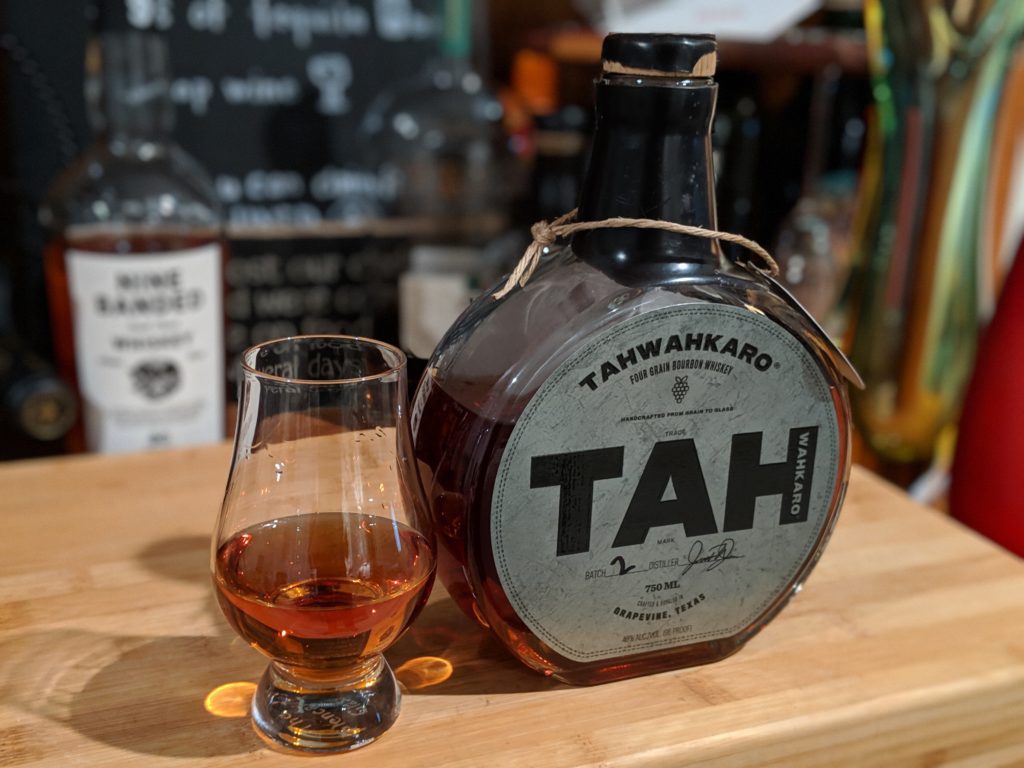 Mixed in with that tortilla scent, I can identify those hallmarks of an American bourbon, specifically the caramel and vanilla aromas that come from a charred oak barrel. In this area, the caramel is the most forward smell with the vanilla simply lurking in the background.

I didn’t expect the flavor that I found when I took my first sip. The best description I can give you of the flavor profile is “s’mores.”

The very first thing I get is something that tastes like a cinnamon graham cracker. There’s some bread-y flavors, I suspect thanks to the wheat and barley, and after a beat some spice starts to come into the picture that tastes to me like cinnamon.

The spirit is smooth and delicious throughout, with no bitterness or unpleasantness. It’s absolutely delicious.

The smell of the spirit has calmed down a bit, reducing to a more traditional bourbon smell with heavy caramel toffee and some light vanilla traces sprinkled in.

Overall the taste has “mellowed out” as well, with some of the more interesting flavors being lost in the mix. But even so, it holds its own as a proper bourbon. The oak inspired flavors like vanilla and caramel are still present, but I think I also detect some more earthy tones coming into the picture. Tobacco, I think? With my cigar affinity, it’s often hard to determine whether that’s an actual flavor or just wishful thinking, but I think in this case it’s actually the spirit.

I think the bitters still win on this one, unfortunately. The spirit is sweet and puts up a valiant effort trying to counteract the bitterness of the orange bitters but it’s ultimately a losing battle. Add in a touch more sugar, though, and Thanos would be proud — it’s balanced, as all things should be.

It’s pretty good. It’s not the greatest, but it’s still better than average.

I like it a lot. The taste when sampled neat is really fantastic and different, and even when you put it in a really adverse conditions, the worst thing you can say is that “it tastes like a bourbon.” There’s always some delicious flavors poking through, and to me the height of the spirit on its own is more than enough to balance out any issues.

Overall Rating: 5/5
I can’t wait to see what’s just around the bend for this distillery.